We are delighted that Alfred Bartres from Barcelona is part of our coaching team, a former top 500 player in the Spanish ranking.

Alfred has a degree in personal training and a Master in Sport Management and Leisure as well as the Catalonian and Spanish Federation qualification for coaching.

We interviewed him for the site.

What age did you start?
I started to play when I was 12 years old

Who is your favourite tennis player?
Roger Federer because he has very good technical shots and a very good brain game too

If you had a super power what would it be?
Being able to read the mind

Why is Drummond coaching the best in the world?
Because you can learn and play tennis in a fun way

Where were you born?
Barcelona

We are delighted that Sam Parfitt has joined our coaching team, born in Norwich Sam left home at 15 to play tennis in London full-time. He moved to the States at 18 as a tennis scholar. Sam’s career was shorten due to injuries but had a great time playing, training with grand slam champions like Wes Moodie and Jeremy Bates

He is certified USPTA professional coach, and was recently awarded their highest professional development award. He is also an Etcheberry-certified strength and conditioning for tennis coach and a certified mindfulness teacher.

How long have you been playing tennis?

What age did you start?

I began playing tennis by hitting against the wall when I was very small – 3 or so! I didn’t start tournaments until after most of my friends, though, at about age 11 or 12.

Who is your favourite tennis player? Why?

As a child I loved Agassi, even though I liked to serve and volley! “Agassi” was my first word, before “Mum” or “Dad”! Now I just love to watch Roger Federer play – I think he is the epitome of what a tennis player should be like!

I need to work on my topspin backhand return of serve…Sometimes I slice from that side too much!

If you had a super power what would it be?

I would make everyone pain-free and healthy.

Who do you think will win Wimbledon next year? Male/Female

Male – Let’s tempt fate and make it three for A-Mud.

What is your top tennis tip?

Focus on the really fun parts of tennis while you’re on court. Enjoy the feeling of sliding across the clay, hitting the ball out of the middle of the strings, stretching out the follow through, giving a good grunt, teasing your opponent with tricky shots, having a laugh at a net cord. Just relax and enjoy it all 🙂

Why is Drummond coaching the best in the world?

Drummond inspires fun…which in turn brings people back…which in turn keeps people improving…which brings fun and so on and so on! This is the way sport and life were meant to be! It’s very pure, positive, and meaningful. Kudos to Sophie and team!

Where were you born?

What’s your date of birth? 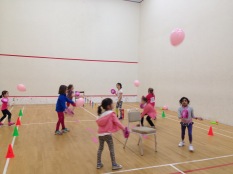 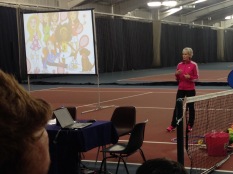 The heart of this programme are the games Judy Murray played with Andy and Jamie when they were little. Think bean bags and buckets over rackets and backspin to focus on agility, balance and co-ordination. Tennis on the road is the latest programme to hit Scotland by storm and is included in all Tennis with Sophie coaching sessions. I have worked closely with Judy Murray and Kris Souter in coaching children, parents, gym teachers and 6th form students to create a new generation of skilled and happy tennis enthusiasts. 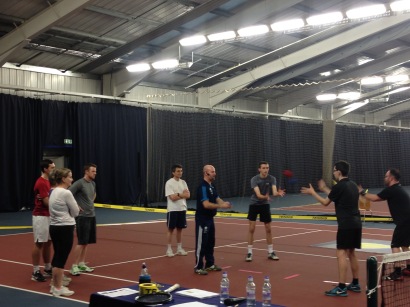 Freshly programmed. Please forgive us for any glitches.

Adult tennis coaching for all levels and abilities either individual or in group lessons. No booking required for Adult group lessons; just pay and play. Non members welcome. Read more.